Sunday Soul - Doing It to Death 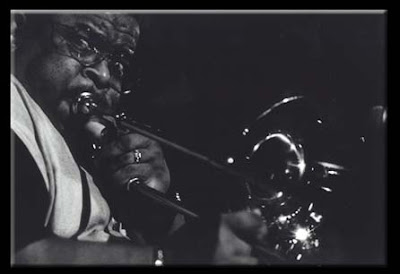 Usually I post up Sunday Soul with a set of lyrics that I especially enjoy from the cut along with a picture that somehow evokes the feelings behind them. Today I'm going to forgo the lyrics and instead just share a song that stews and bubbles with more funk that you can shake a stick at. Although it's only credited to Fred Wesley & the J.B.'s, it also features the Godfather of Soul James Brown himself on vocals. Wesley (that's him above on trombone) was one of the many talented musicians that laid down the groove for Brown to sing over (as well as directing the backing unit, the J.B.'s), and this 45 came out on Brown's label People (an imprint of Polydor).