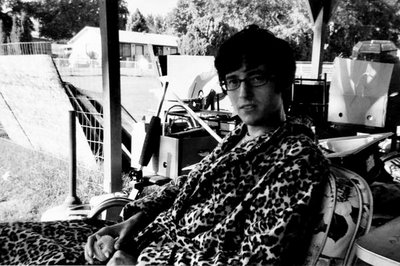 Aaron's first album, Southern Heart In Western Skin, is short (weighing in at a little under 30 minutes), and sweet; every last note of it. You won't find any guest performances by big name musicians here, and that's part of its attraction. It's clearly a low-budget album, with songs recorded in Washington, Massachusetts, and California, which makes you just want to cheer for the underdog when the underdog puts together such a finely crafted album on his own. And when I say on his own, I mean Aaron doesn't have a record company to back him up. It's Aaron, Aaron, and Aaron who's responsible for writing, performing, and packaging. And speaking of packaging, props to Aaron for including lyrics for us.

The music. What can I say? Aaron's song run the gamut from twangy harmonic humming songs (The Real World), to meloncholy love songs (Devil's Lake), to irish jiggy punk rock (Santa Ana: my favorite song on the album),. Not to say that he's trying to please everyone to meet a wider market. Aaron's musical versatility feels entirely genuine with no pretensions or pop gimmicks. His roots are in some classic musicians such as Johnny Cash and Leadbelly, but he also enjoys some modern marvels like Belle & Sebastian and The Mountain Goats. He doesn't stop there, though: being an avid reader, Aaron cites authors such as Fydor Dostoevsky, Henry Miller, Haruki Murakami, Knut Hamsun as influences. "Often time my lyrics are adaptations of things I've read, including various Yiddish, Arabic, and American folk tales." And although there are no big name guitarists backing him up, Aaron has a skilled group supporting him with a variety of traditional instruments (including lap steel, cello, piano, and others).

So I'll ask the question again: What ISN'T there to like about Aaron Schroeder? 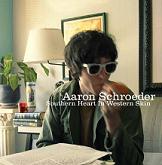 Become Aaron's friend on MySpace.
Posted by Sean at 7:21 PM