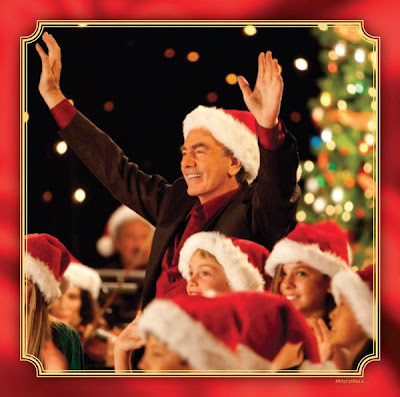 It's getting to be that time of year. The time for egg nog (preferrably spiked), candy cane colored underwear, and Christmas CDs. I know what you're saying, "It's WAY too early to be listening to Christmas music." Well I say, "Stop bah-humbuging the seasonal grooves and start ordering them now so you'll have them in time to spin for your Black Friday suicide shopping mission."

Now that we've gotten that out of the way, it's time for the first Christmas CD review of the year here at MISB. I'll straight out admit that I get into the X-mas jams, so long as it isn't the same tired tunes over and over again. My love of the holiday music goes deep; as a kid I can remember listening to the Beach Boys' Christmas album every year (on vinyl never the less). While today's review doesn't come from them, it does come from an artists who's been around almost as long and who I have almost as old a connection with: Neil Diamond. It's titled A Cherry Cherry Christmas (a play on a very merry Christmas perhaps?), but isn't Diamond's first foray into the field. He's released two previous albums, aptly titled The Christmas Album and The Christmas Album, Volume 2, some of whose songs appear in this latest release.

Of this new collections fourteen tracks, four are pulled from his first Christmas album, five from the second, and five are new songs for this album, including the title track and a cover version of Adam Sandler's Chanukah Song. While a few of the recycled songs feel very much so, there are few many that hold their enjoyability here, fifteen plus years later. The title track, on other hand, is pure and timeless Diamond. Those fans out there who've enjoyed his stripped down sound under the guidance of Rick Rubin might be disappointed here. This is your parents' classic Diamond. Come into it with that in mind, and you might just enjoy it regardless. Visit his website, the compilation's label Columbia Records, and become his friend on MySpace.
Posted by Sean at 2:43 PM